This article might be more relevant for Angular 2 developers, but I believe it can be used with other frameworks as well. It’s just a handbook for writing scalable and maintainable single-page-applications. It’s important to note, that this is not the only way, but it’s a way that works for me in quite a few situations.

A lot of developers are having trouble writing large-scale, maintainable single-page-applications. This results in early technical debt, a lot of frustration when fixing bugs, an eternal struggle when writing unit tests and creating reusable chunks of code…

One of the biggest challenges might be: extending existing logic and writing new features based on a tricky foundation.

Single-page-applications are rather new, and especially older frameworks gave you 100 different ways to design an application. There wasn’t any structure, encapsulation and everything was tightly coupled to each other.

Most of the time in the beginning of a project the development process went blazingly fast. But after a few developers, features, refactors, the code started to become less maintainable. It started to look like spaghetti. Frameworks have matured a lot, but it’s also important that the architecture of the software you write matures along with the process.

To explain the architecture where this article is all about, here’s a reminder of how a web-application in 2016 might look like. These are concepts that your applications should rely on these days. It doesn’t matter whether using React, Angular 2 or something else. These principles exist to make sure that your web architecture becomes maintainable.

SPA-technologies like React and Angular2 make us use components. A component is a piece of HTML and JavaScript combined. We don’t want to use standalone views or standalone controllers anymore. They can grow exponentially and are related to each other in a way that is hard to maintain.

So basically the philosophy here is: everything should be a component, even your pages and your application. An application could look like this:

Some very simple but very important tips in designing components:

If you are new to designing components, this article might be of help: components demystified

Before, we used to update application state in a rather inefficient manner:

Did you ever tried to make sibling components communicate with each other? Sometimes it seems pragmatic to do so, but please don’t. 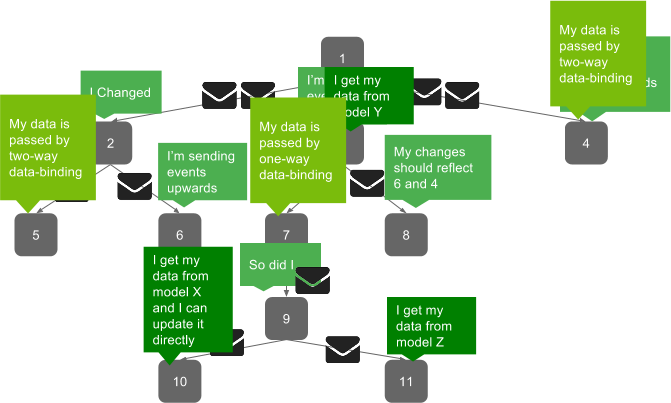 This is bad design! It’s almost impossible to see in which direction the data flows. I’s also very hard to maintain this code, fix bugs in it or develop features. What we do want, is a unidirectional dataflow like Flux or Redux.

It basically looks like this: child components only notify their parent components, the parent (smart component) will send an action to a store that contains state, and that action will update the state for the entire application. When that state is being updated, we can re-evaluate the component tree. As a result the data always flows in the same direction (downwards). 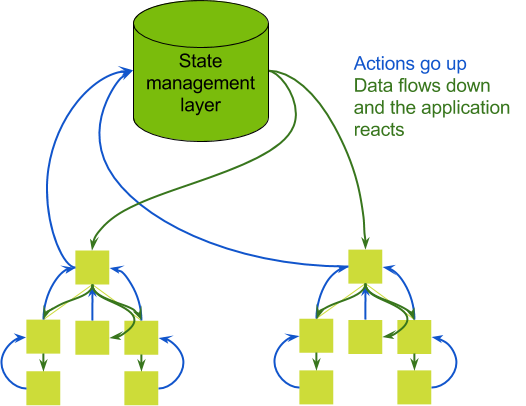 The big advantages of this approach are:

I designed a certain architecture based on principles of today (most of them explained above) and even principles from 10 years back. Would I say it’s the way to go for every SPA? Not at all… Every type of software deserves its own architecture, and I’m just showing a concept that works for me in a lot of scenarios. This architecture might come in handy for developers that are writing Angular 2 where we can profit from awesome features like dependency injection, but it can also be applied in other frameworks.

This principle is partially based on the Sandbox principle of Nicholas Zakas, which is already a few years old. For Nicholas Zakas, the sandbox acts like a dispatcher between different modules where a module is like a smart component. In that architecture, there was no unidirectional dataflow though. For me a sandbox is a way to decouple the presentation layer from the application logic, but that’s not its only responsibility.

But let’s start from the beginning… In this particular scenario I’m going to assume that we use Redux. However, it doesn’t really matter what kind of state management you use, but it’s important that you know the principle behind it.

Rule number ONE: Don’t let your components play with all the toys

The same reason you don’t let children play with everything: “It might get messy”. Smart components (also named containers here) should also follow a very strict set of rules. We don’t want to inject every service that we want in there, just because we can. For instance: it might not make sense to inject a game-engine in an authentication module.

The example above has too much dependencies in its constructor. It has to many links to the rest of the application. When you persue this kind of design it might end up looking like this: (The REST stands for restful services, so these are just the HTTP blocks) 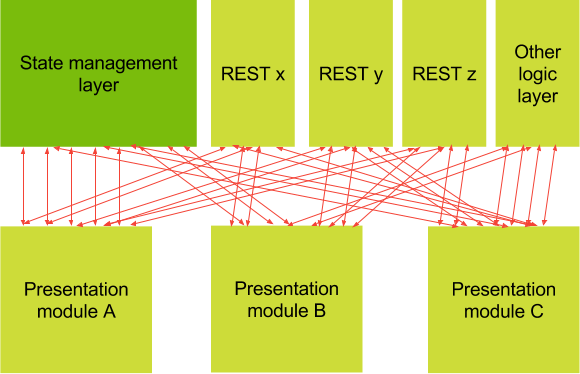 This is starting to look like spaghetti code, where everything is really tightly coupled. An abstraction layer could really help us here. In the example below we can see that the presentation layer is completely decoupled and the abstraction layer delegates everything. 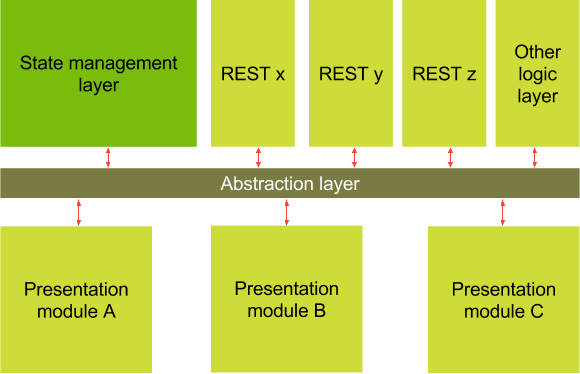 Rule number TWO: Components should not know about the state management layer

Dumb components and smart components shouldn’t know that you use Redux, or any other state management layer for that matter. They should not care how state is being managed. They just trust that it’s being handled the right way. It’s not their responsibility. The responsibility of the presentation layer is “to present” and “to delegate”.

Now the component really focusses on its responsibility. It doesn’t know how the user will be added or removed, it doesn’t know who populates the users$-stream, foo$-stream and bar$-stream. It gives that responsibility to its abstraction layer. Right now, the presentation layer is completely decoupled from the rest of the application. Which brings the following advantages

Rule number THREE: HTTP services should not know about the state management layer

At a first glance, it might seem pragmatic to handle the result of a GET call and put it in the store right in the service. But the only goal an HTTP service has, is to perform HTTP requests and return the result of those requests. This might look pragmatic:

But now our http services are very tightly coupled to our state management system. 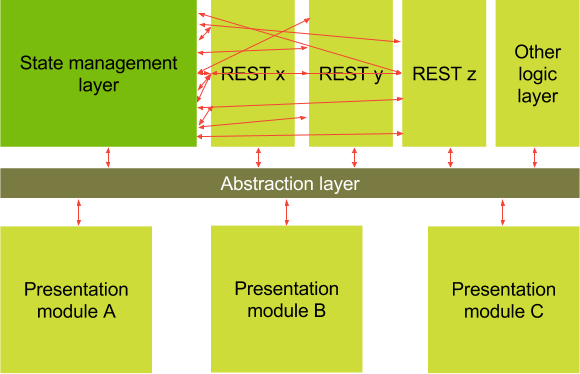 This is actually the only responsibility an http service should have.

This is not the only solution of course, but it’s a solution that has worked most of the times for me. Every presentational module has access to its own sandbox. A sandbox is a service that will expose:

No it’s not just a facade :) It should have a certain amount of logic. 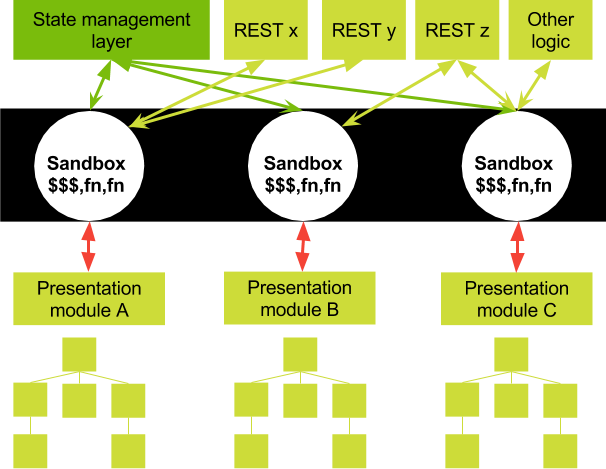 The advantages of the sandbox are:

This architecture is one way of doing things, but that doesn’t mean that it’s the only way.

I do believe it’s very important to have encapsulation, loose-coupling and a decent structure of responsibilities. The frontend landscape evolves quickly, which means that we might want to be flexible for refactors/new technologies. I hope you enjoyed the article.

Checkout strongbrew.io where Kwinten Pisman and me are giving a “reactive applications workshop” where we go more into detail on this subject.

A very special thanks

I want to thank the people who have reviewed this article and gave me their valuable input. Thank you so much Jurgen Van de Moere, Carmen Popoviciu, Manfred Steyer and Juri Strumpflohner!!!