This article explains how the “reactive-programming” approach helps us to create an awesome infinite-scroll-list in only a few lines of code. For this article, we are going to use RxJS and Angular. If RxJS is completely new, it might be a good idea to read the documentation first. Whether we use Angular or something else like React, it shouldn’t really interfere with the clarity of this article.

Reactive programming is a rather old but very powerful approach of solving problems. However, we can run into problems when trying to think in a completely reactive manner. Thinking reactively is a huge mind switch that we must make to completely accept this “new” way of coding things. The whole “Our application reacts to a state-management-layer like redux” principle is grasped quite quickly (it’s reactive programming too), but when it comes to thinking in streams it can become quite difficult in the beginning.

What should it do?

An infinite-scroll-list, is a list where the data is being loaded asynchronosly when the user scrolls further down the application. It’s a great way to avoid a pager (where the user had to click on every time) and it can really keep the application performant. It’s an efficient way to keep bandwidth low and increase the user-experience.

For this scenario, let’s say that every page contains 10 results and that all the pages with results are being shown as one long scrollable list => the infinite-scroll-list.

Let’s list the features of what our infinite-scroll-list must do:

Like most coding decisions, drawing them on a whiteboard first might be a good idea. That might be a personal approach, but it helps us not to write code that will be removed/refactored later.

Based on the feature-list, there are three actions that will trigger the application to load data: Scrolling, resizing, and a manual action that will be triggered to manually fetch pages. When thinking reactively we can see 3 sources of events happening, let’s call them streams:

Note: We will suffix the streams with $ to indicate that they are streams, this is a convention (personal preference)

Let’s draw these streams on a whiteboard: 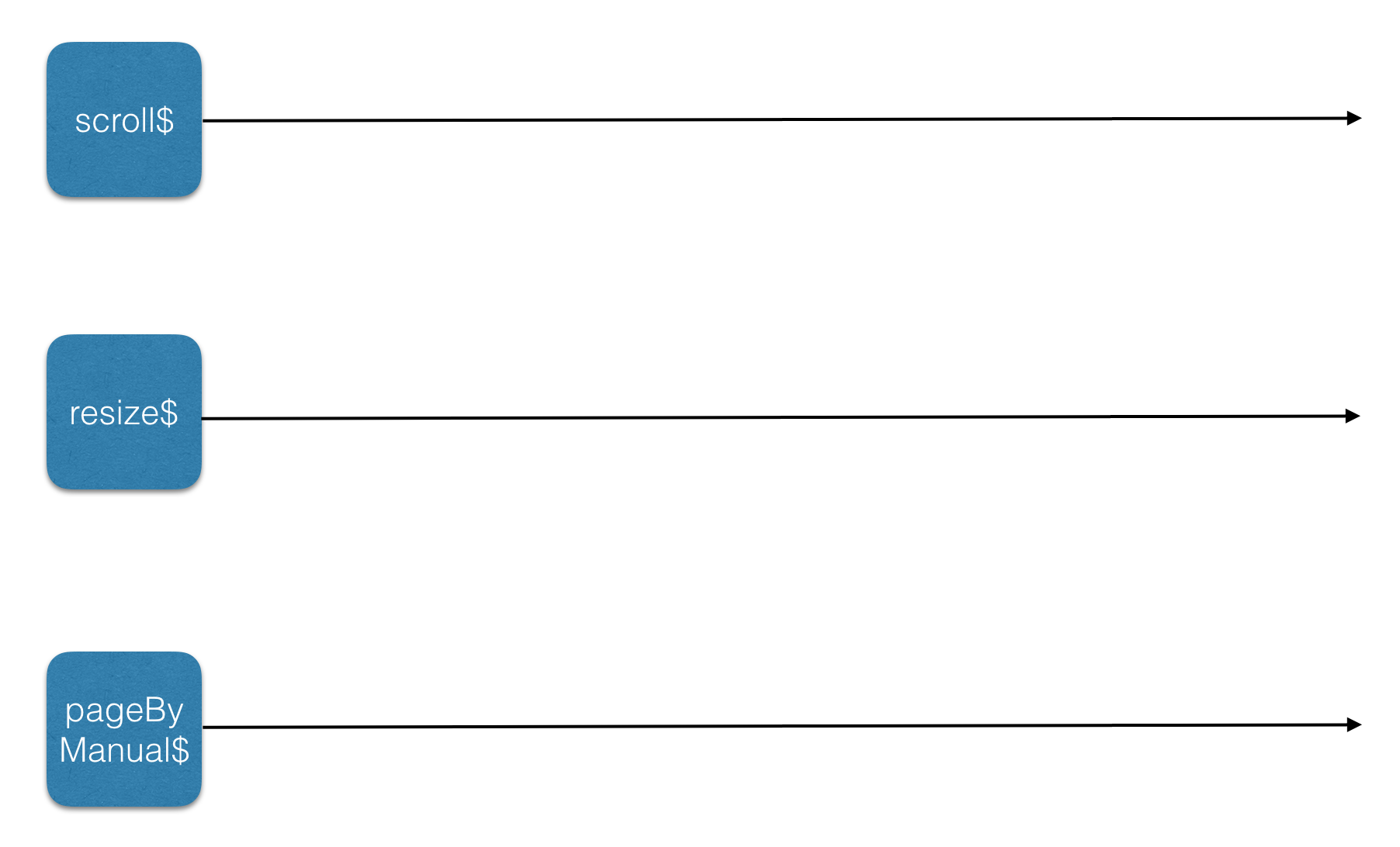 These streams would contain certain values over time: 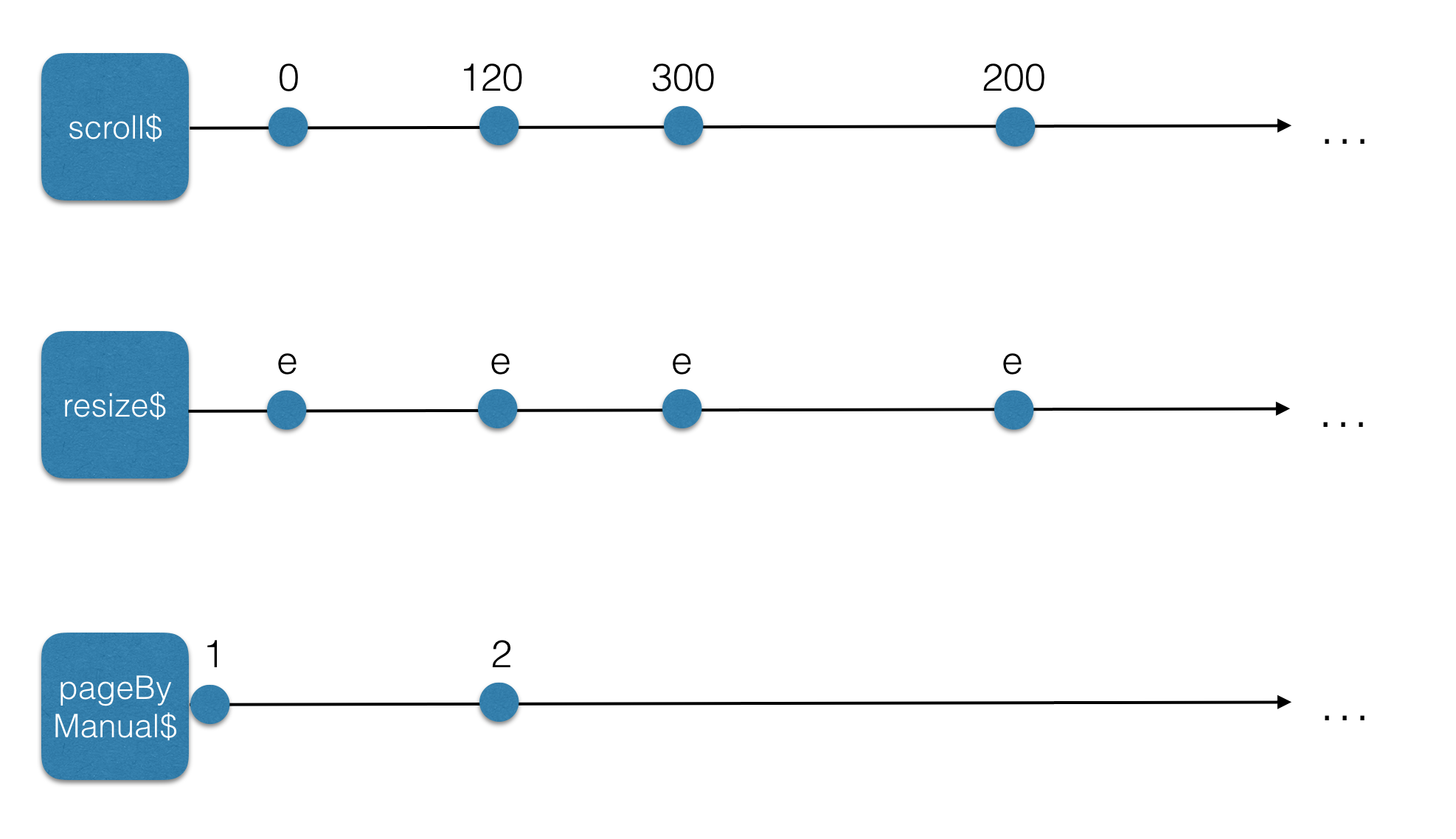 The scroll$ stream has Y values, which we can use to calculate the page number.

The resize$ stream has event values. We don’t need the values but we do need to know when the user resizes its window.

The pageByManual$ will contain page numbers, which we can set directly since this is a subject (more on that later).

What if we could map all these streams, to streams that would contain page numbers? That would be awesome, because based on the page number, we could load a specific page. How we map the current streams to page number-streams is not something that we need to think about right now (we are just drawing remember?). The next drawing might look something like this: 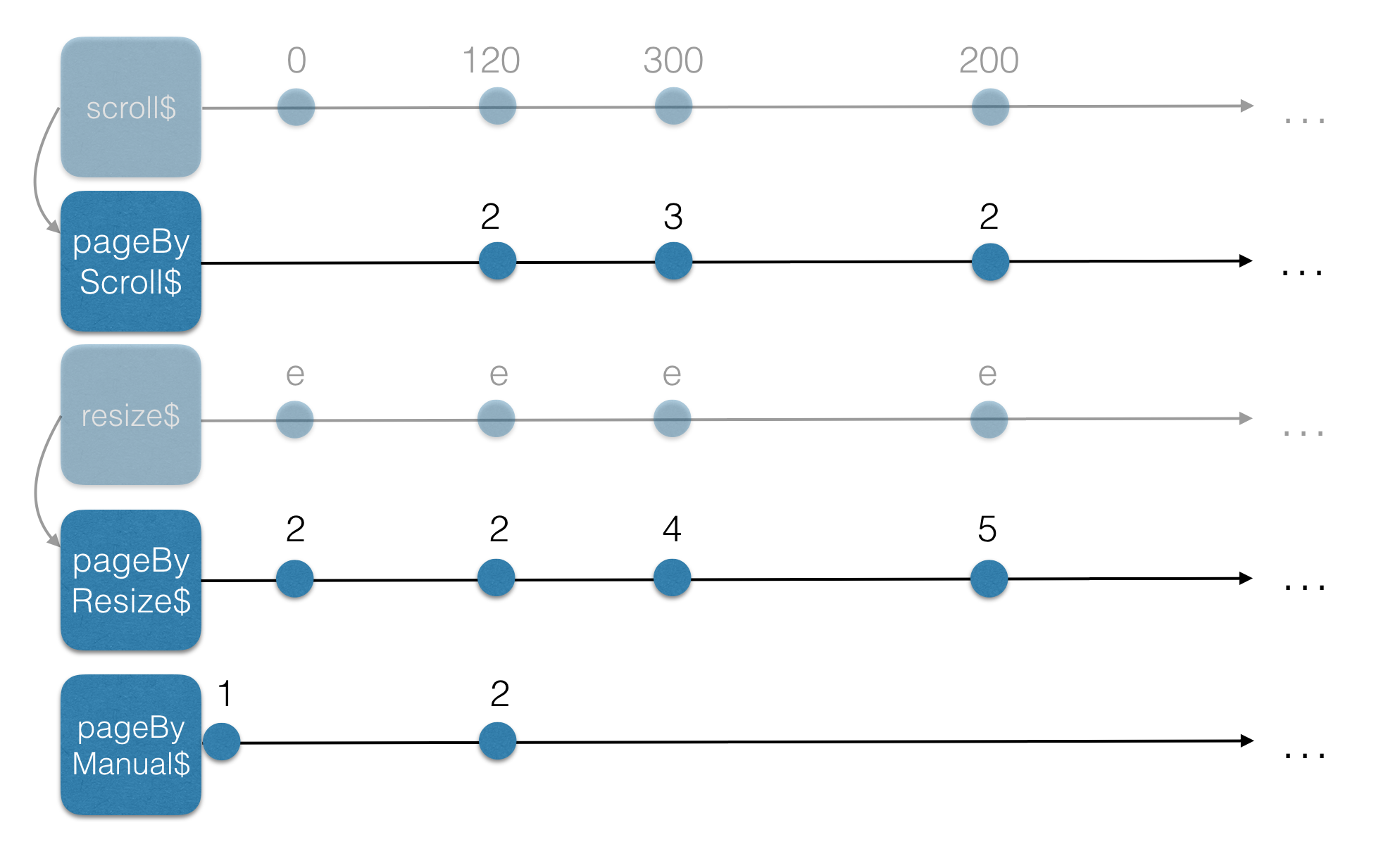 We can see that we have created the following streams based on our initial streams:

What if we could merge these 3 page-number streams in an efficient manner, than we would get a new stream called pageToLoad$, that would contain page numbers created by scrolling-events, resize-events, and manual events. 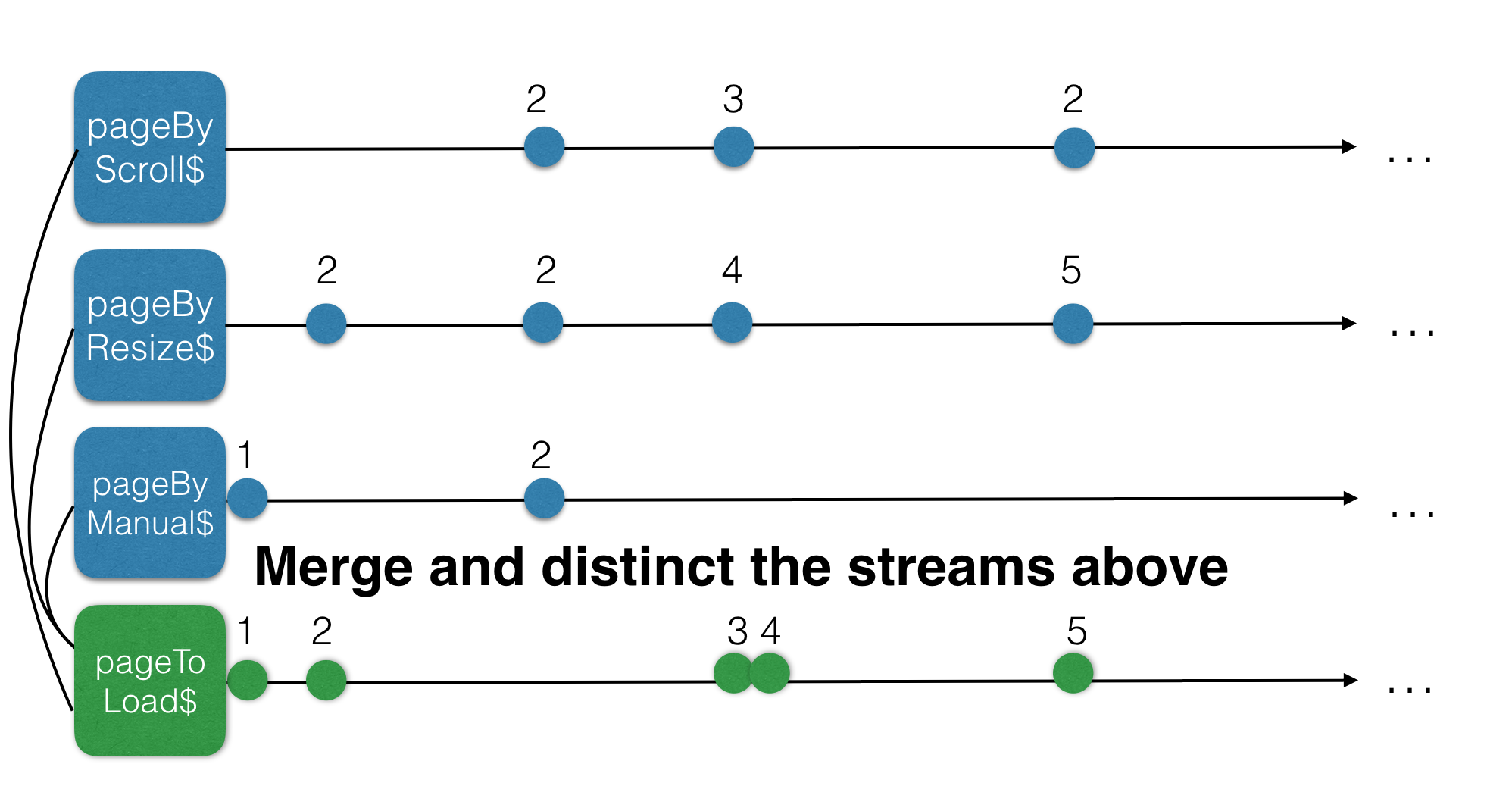 Now let’s throw this in one big schema. We have drawn more than enough, we have a clear vision of what our inifinte-scroll-list should do, so let’s start shall we?

To calculate which page needs to be loaded we need 2 properties:

note: In real applications you might want to use injected services for window and document

Awesome, we have the 3 streams with page inputs, now let’s create a pageToLoad$ stream.

The hard part is over. We now have a stream with the page we have to load in there, which is super useful. We don’t need to care anymore about corner cases or other complex logic. Every time a new value in that stream is added, we just need to load the data. That’s it!!

We will use flatmap for this because the fetch-data-call will return a stream as well. FlatMap (or MergeMap) will merge these 2 streams as one.

the complete result might look like this: Note the async pipe that puts the whole subscription process into play

Here is a working plunk

Again, (like I try to prove in previous articles) We don’t need to use third party solutions for everything. The infinite-scroll-list doesn’t contain that much code, and it’s very flexible. Let’s say that we would like to free up DOM-elements and use only 100 items at a time, we could just create a new stream for that :)

Thanks for reading, I hope you enjoyed it.